Apple’s WWDC 2022 developer conference in June brought the latest operating system and the MacBook Air 2022 equipped with the M2 chip in addition to the highest number of graphics processors MacBook Air, the new 35W dual-port USB-C, and this 35W charger has been on the official website shelves, but does not match the charging cable, is now on sale.

This Apple 35W dual USB-C interface small charger can charge two devices at the same time, the body is more compact and exquisite, foldable pins are convenient to carry and storage, Apple recommends this power adapter with MacBook Air, but I think the dual iphone party is more appropriate, let us test the performance!

The box is Apple’s usual design style, pure white simple; front printed with the appearance of the charger, you can understand the approximate configuration; the upper left corner of the brand Logo and the name of the charger.

The box is Apple’s usual design style, pure white simple; front printed with the appearance of the charger, you can understand the approximate configuration; the upper left corner is the brand Logo and the name of the charger.

The side of the box has the optimal compatible models of other devices, so users can roughly understand whether the device in hand is compatible.

The other side of the box has the inscription of the charger specifications and the basic information of the manufacturer.

Open the package, in addition to the charger body, comes with licensing regulations, material composition table and warranty instruction manual.

The body of the charger is designed with a smooth and glossy white polycarbonate shell, with a rounded transition at the edges of the connection surface, which feels warm and silky in the hand.

The bottom is the usual light gray style, with a foldable foot design, the bottom does not protrude after storage, and is also quite convenient to carry out.

Equipped with dual USB-C ports, but the cable needs to be purchased separately with the use of the female port rubber core are white, and the overall consistency.

Both sides have a rounded recessed design to increase the “plugging force” when using.

The bottom is also printed with the specifications inscription. 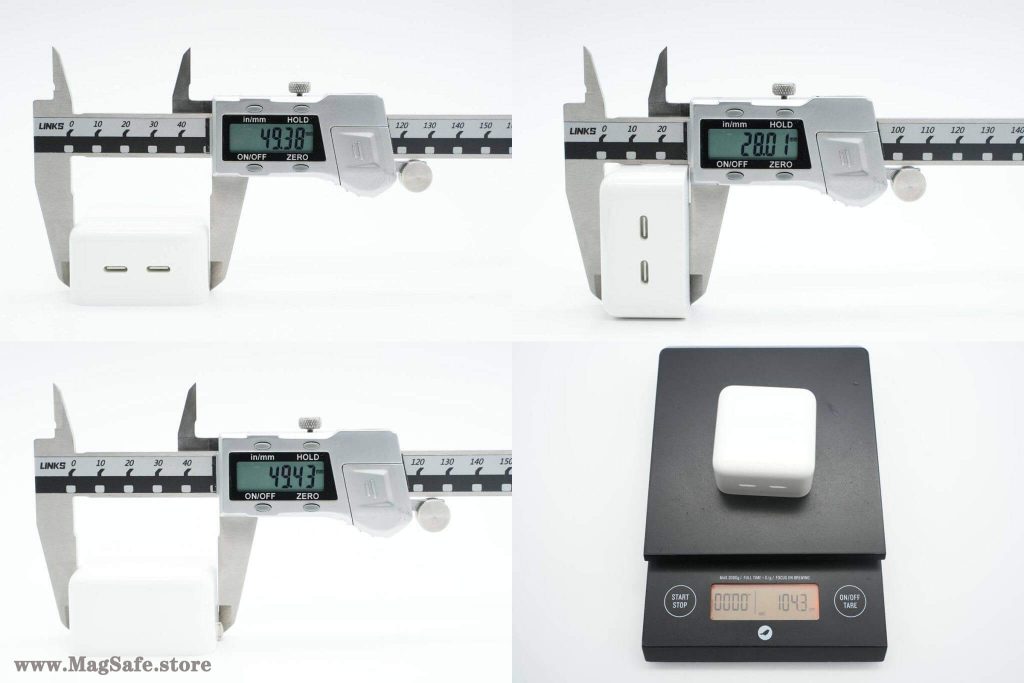 Compared to the original 30W USB-C charger, the body size is slightly smaller.
Placed in the palm of an adult male hand for comparison, the overall look and feel exquisite and compact.

Using POWER-Z MF003 to test this 35W charger, the final score of this Apple 35W charger is 100, which proves that it is an original Apple product and can read the product serial number. 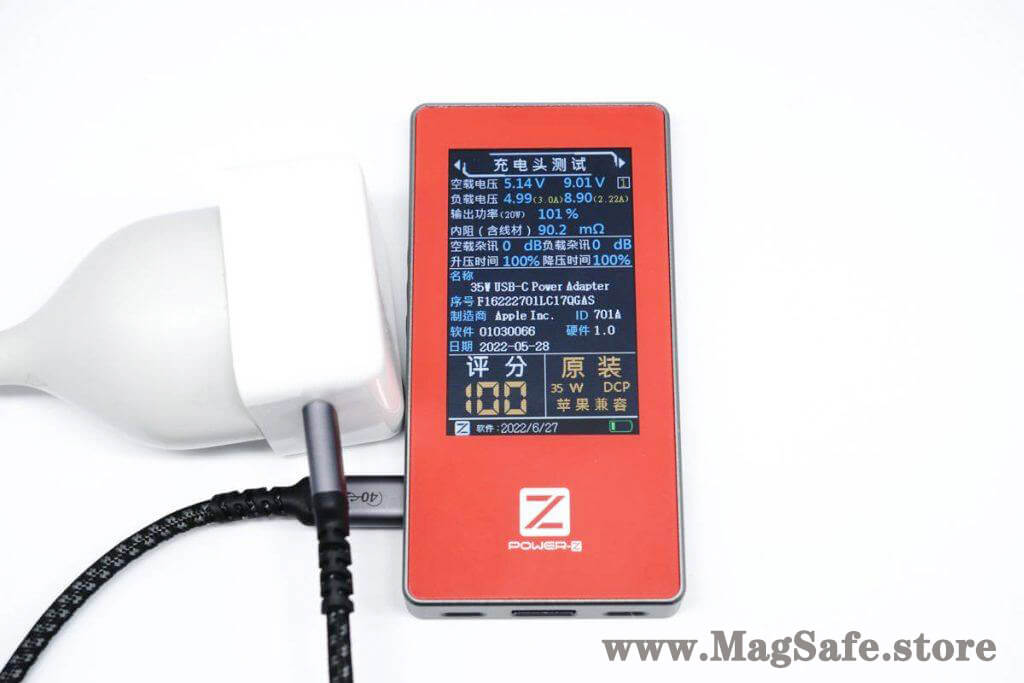 In addition to the labeled support for PD protocols, the test charger complete fast charging protocols, users can match the output device according to the specific protocols for a better fast charging experience. 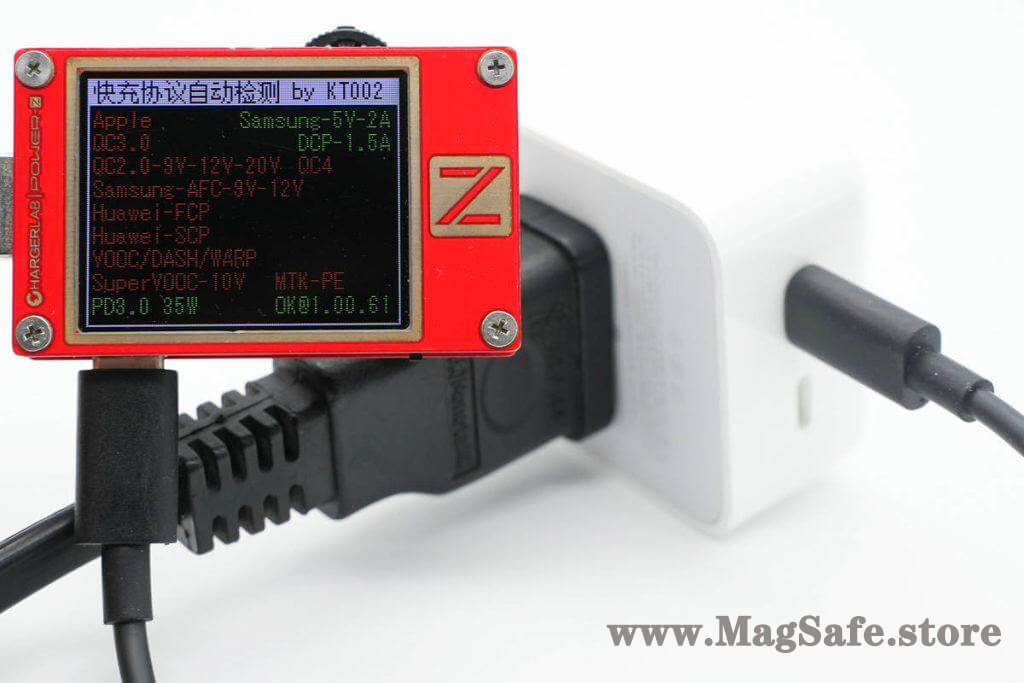 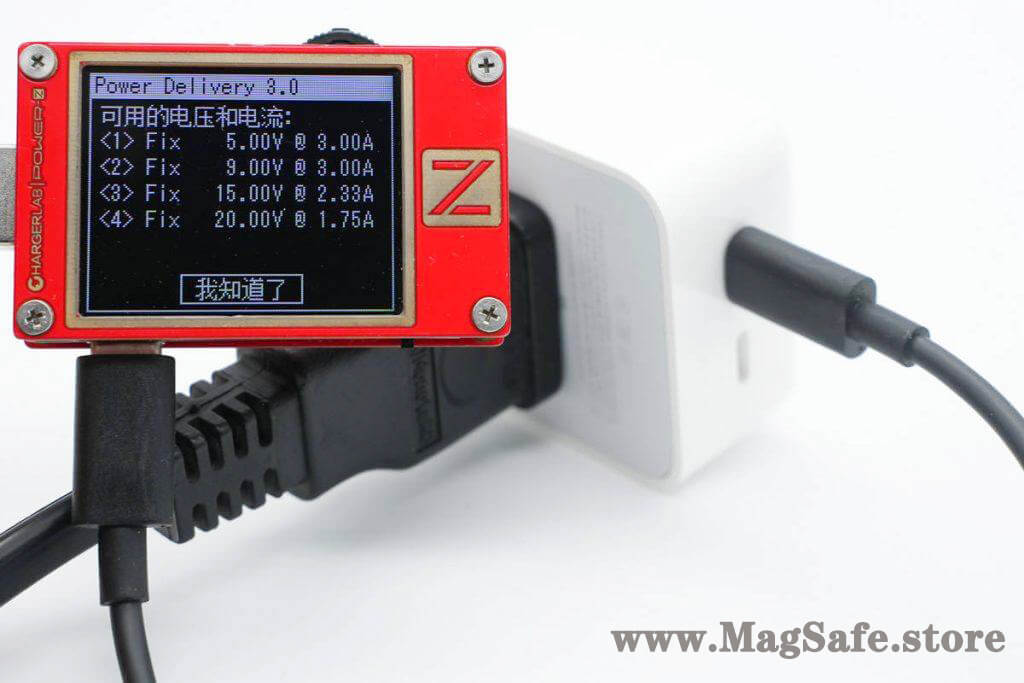 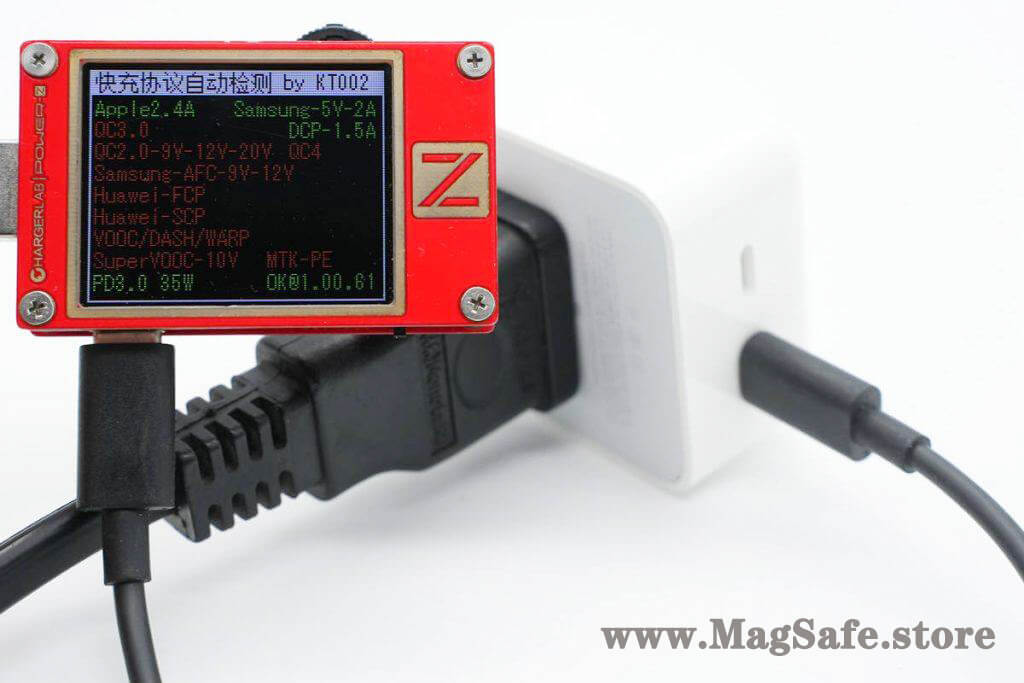 The USB-C2 charging protocol is the same as the C1 port, so I won’t go into too much detail. 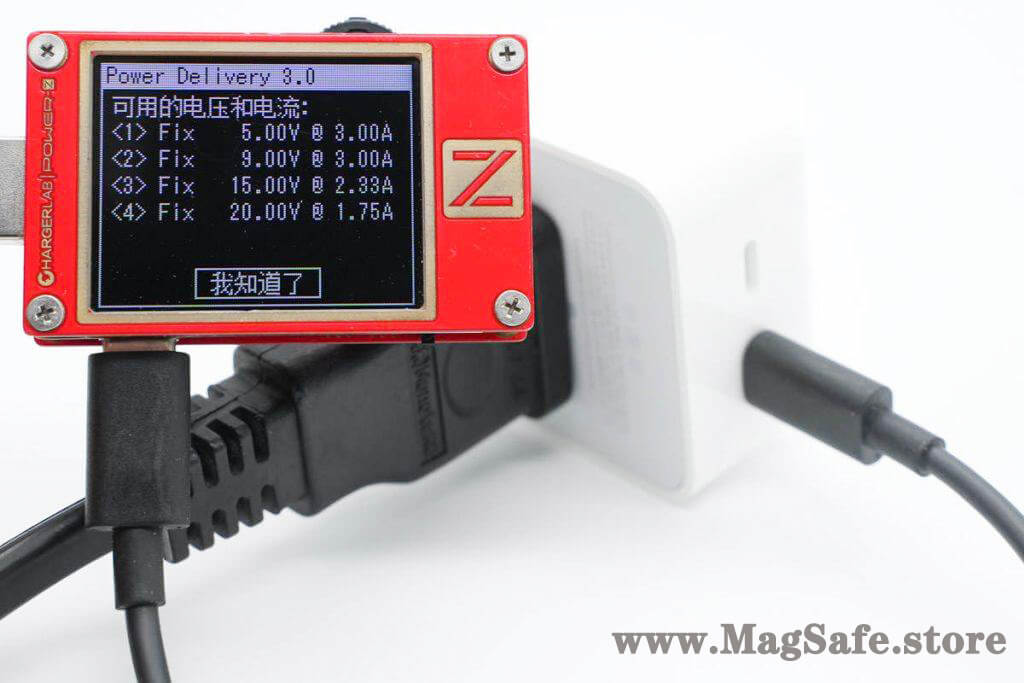 There is no difference between the two USB-C interfaces in terms of PDO messages.

Next, we will take a look at the specific experience of using this charger. Charging head network will be from the compatibility test, charging the whole test, standby power consumption test, conversion efficiency test and other aspects to take you to understand this charger in all aspects.

Compatibility test link can clearly know the charger for each device charging situation, charging head network will use dozens of devices with chargers for testing, to present readers with real test data. 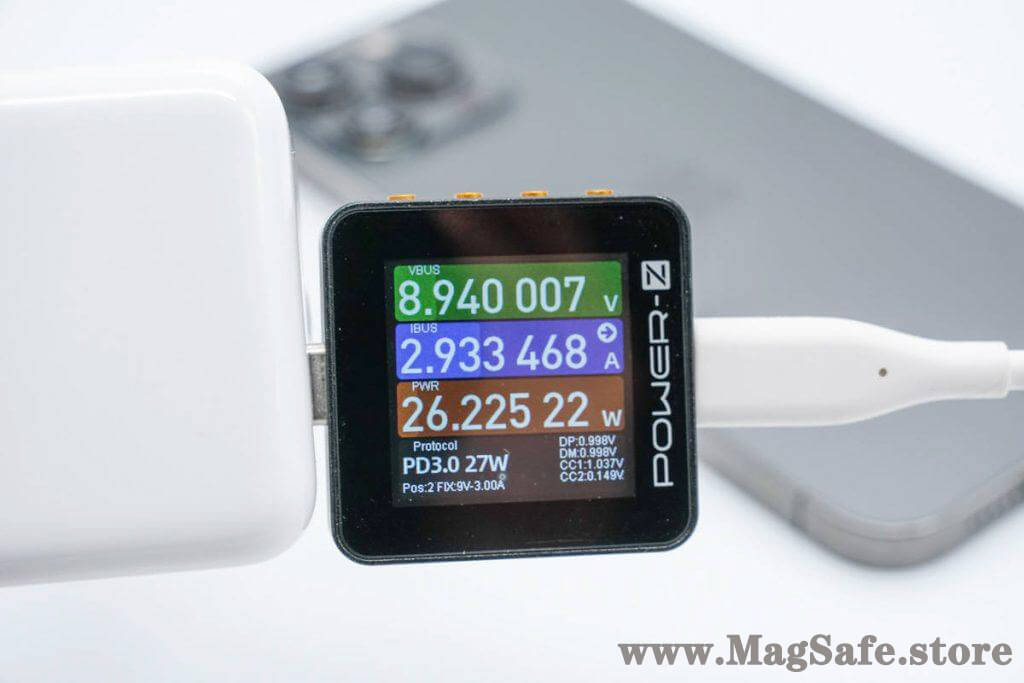 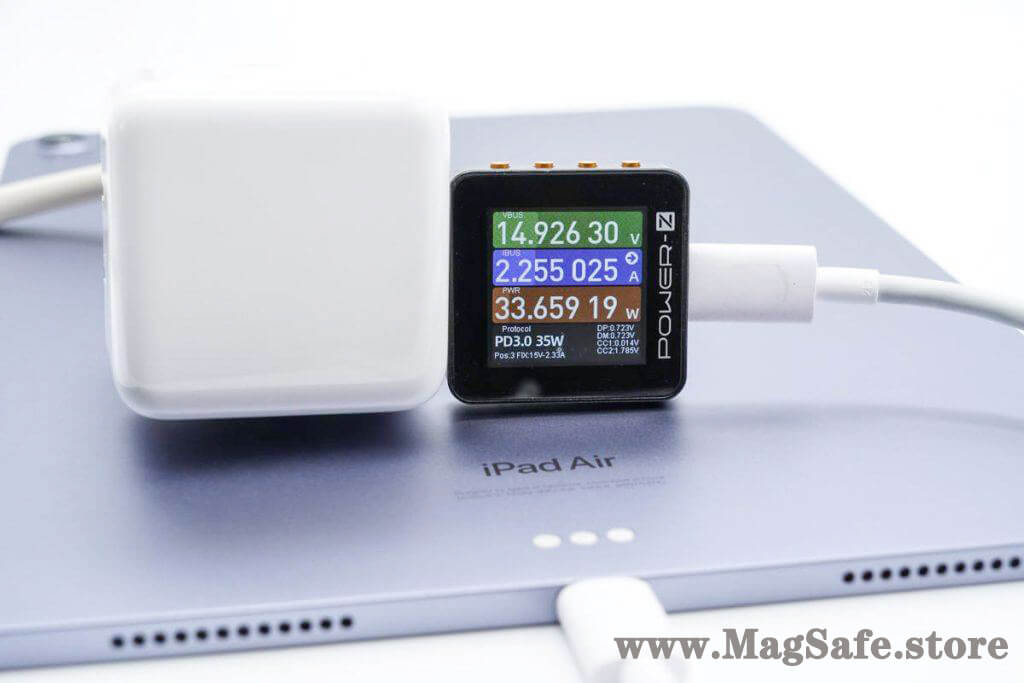 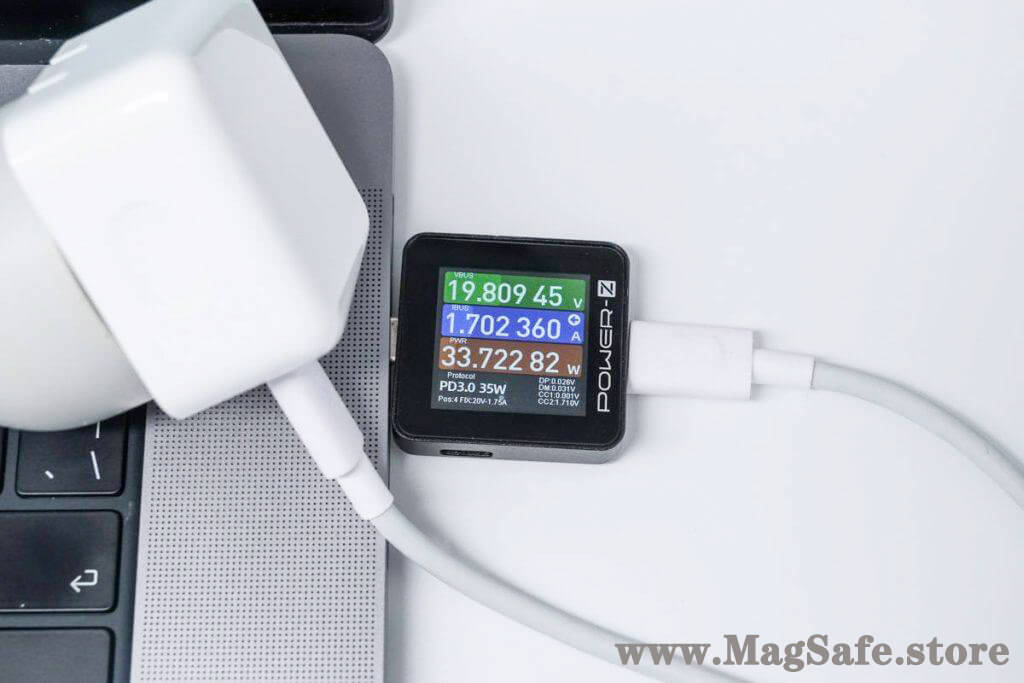 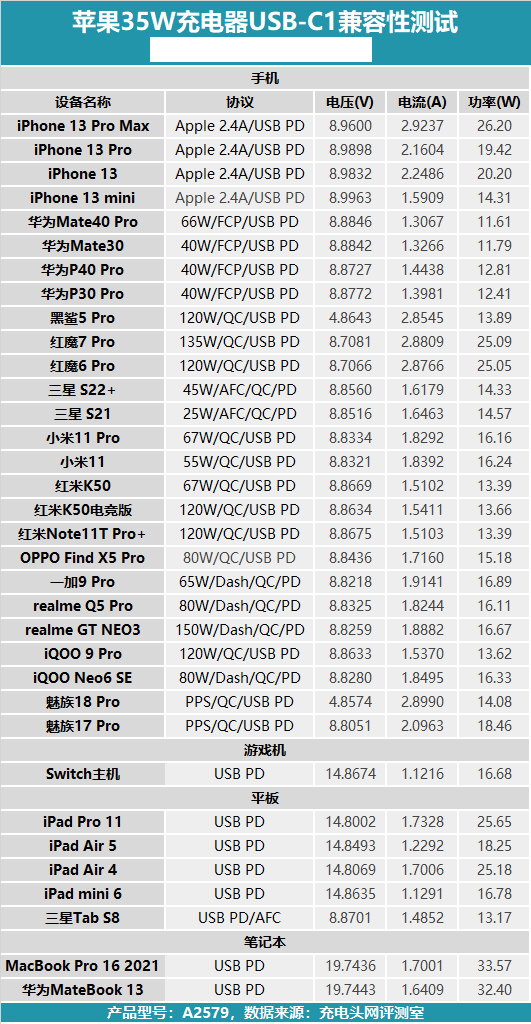 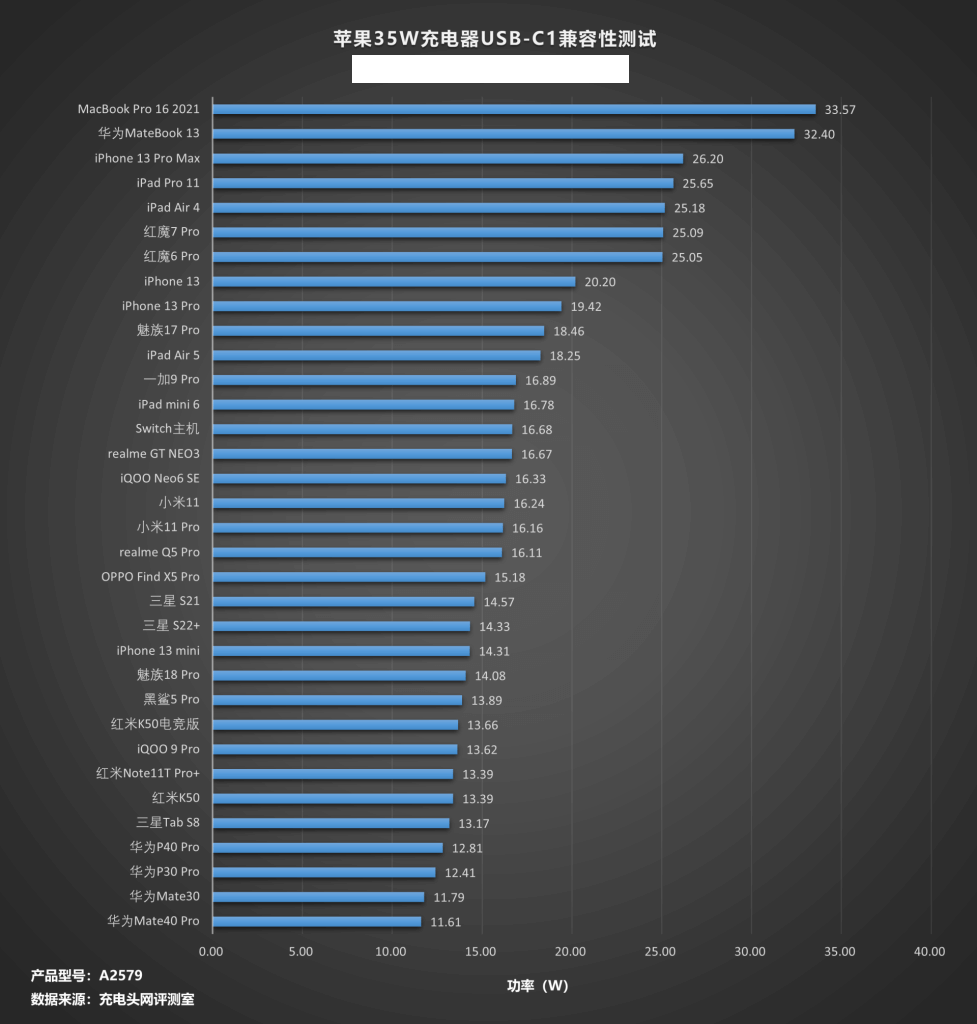 Summing up the compatibility test data, it can be seen that the laptop can be charged at the highest power level of this charger.

Coming to the histogram section, it can be seen that this Apple 35W charger (model: A2579) is more compatible for laptops, while the performance of other devices is overall smooth and not too far apart.

Apple 35W charger (model: A2579) is equipped with dual USB-C ports, independent output are supported up to 35W fast charging, but how the power is distributed in the simultaneous output of multiple ports, this still needs to be tested in practice. 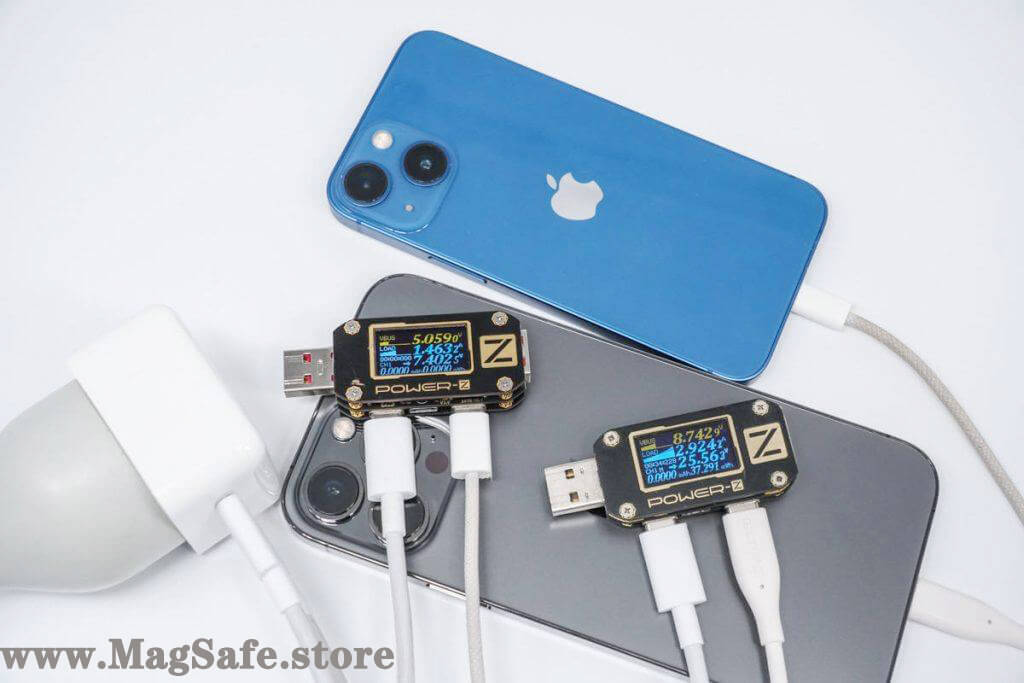 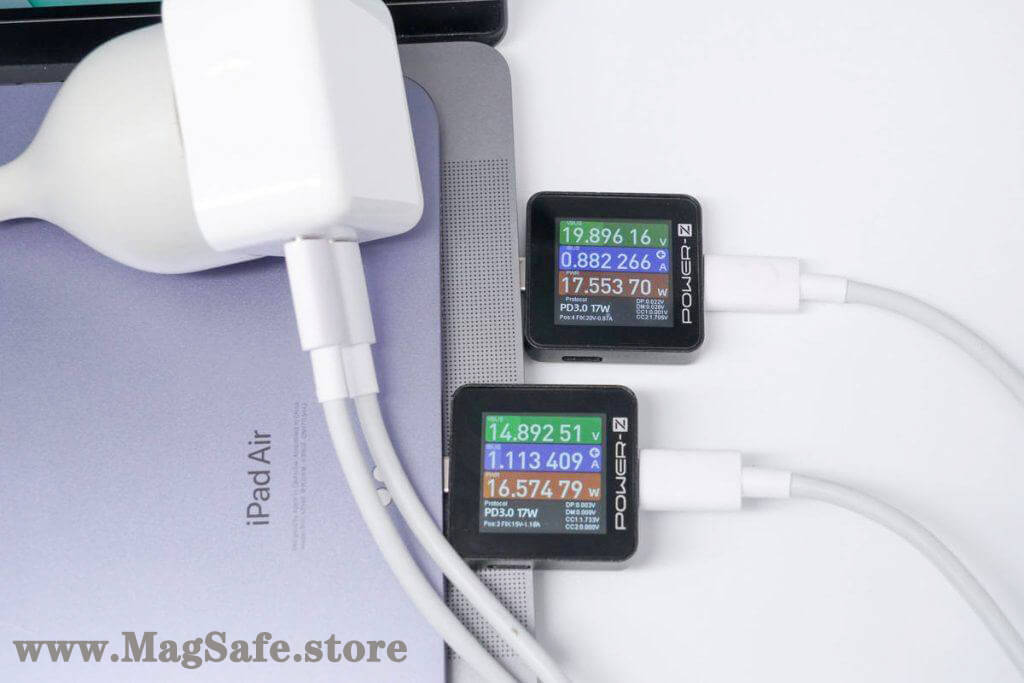 Using USB-C1 to charge the laptop with 17.55W, while using USB-C2 to charge the iPad Air 5 with 16.57W, the 2 USB-C outputs simultaneously can meet the fast charging needs of both the laptop and tablet, with the power distributed according to the rule of 17.5W+17.5W. 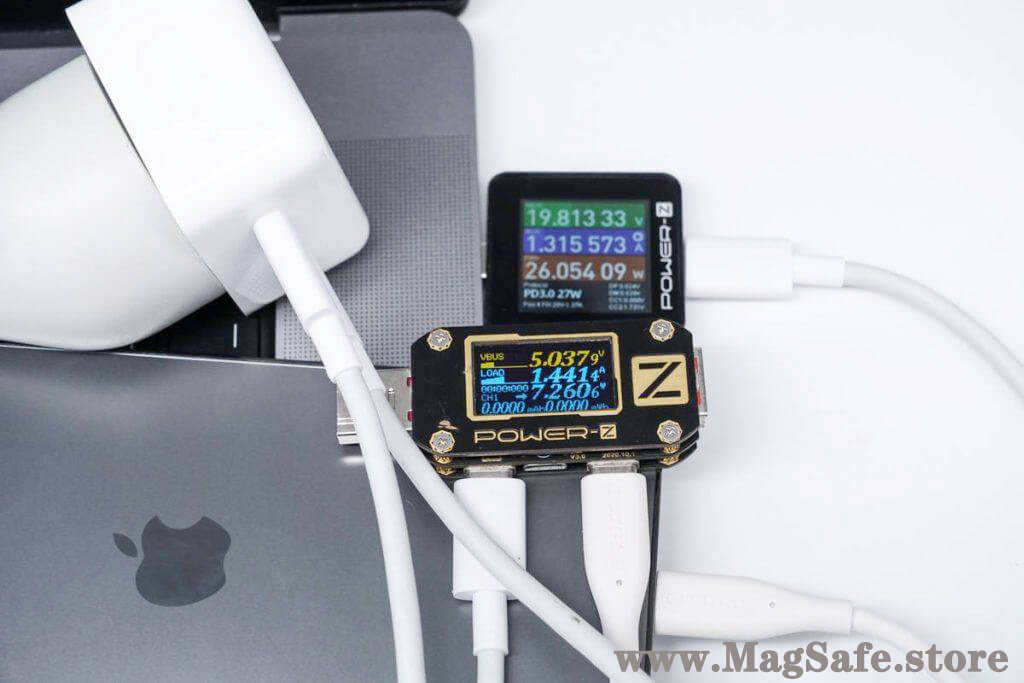 Using USB-C1 to charge the laptop with 26.05W, while using USB-C2 to charge the iPhone 13 Pro Max with 7.26W, the 2 USB-C outputs simultaneously can meet the fast charging needs of both the laptop and the phone, with the power distributed according to the rule of 27W+8W. 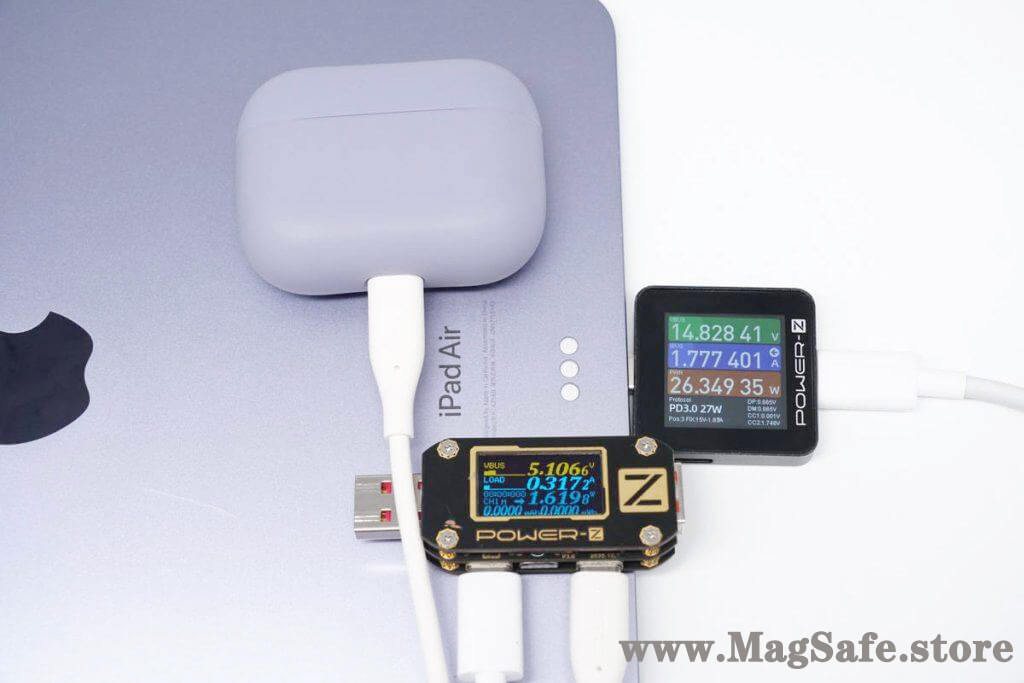 Use USB-C1 to charge iPad Air 5 with 26.35W, while use USB-C2 to charge Bluetooth headset with 1.62W. 2 USB-C output at the same time can meet the fast charging needs of tablet and Bluetooth headset, and the power is distributed according to the rule of 27W+2W. 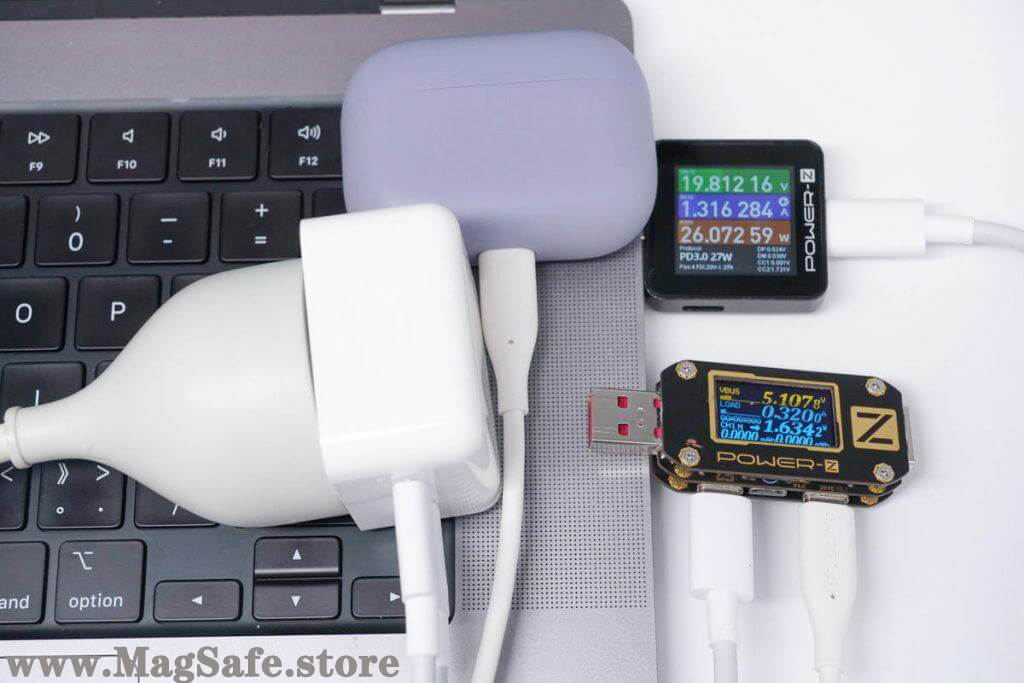 In order to maximize the performance of the charger, we chose to charge the MacBook Air M1 this time, and the following is the whole test. 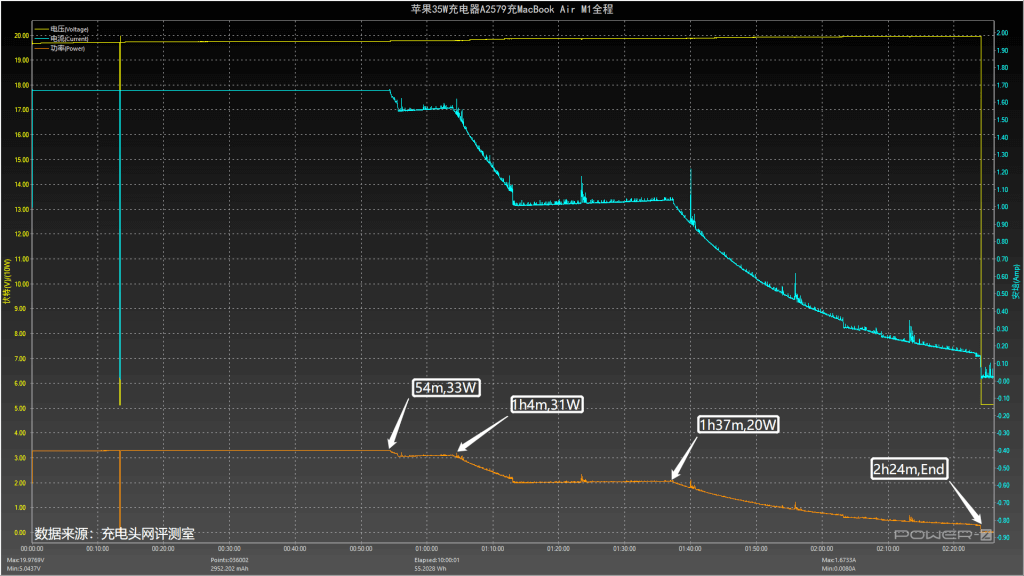 This is the data of charging the MacBook Air M1 with USB-C throughout the entire process, which is roughly divided into 4 stages and ends in 2 hours and 24 minutes with a maximum power of 19.73V 1.66A 32.93W. 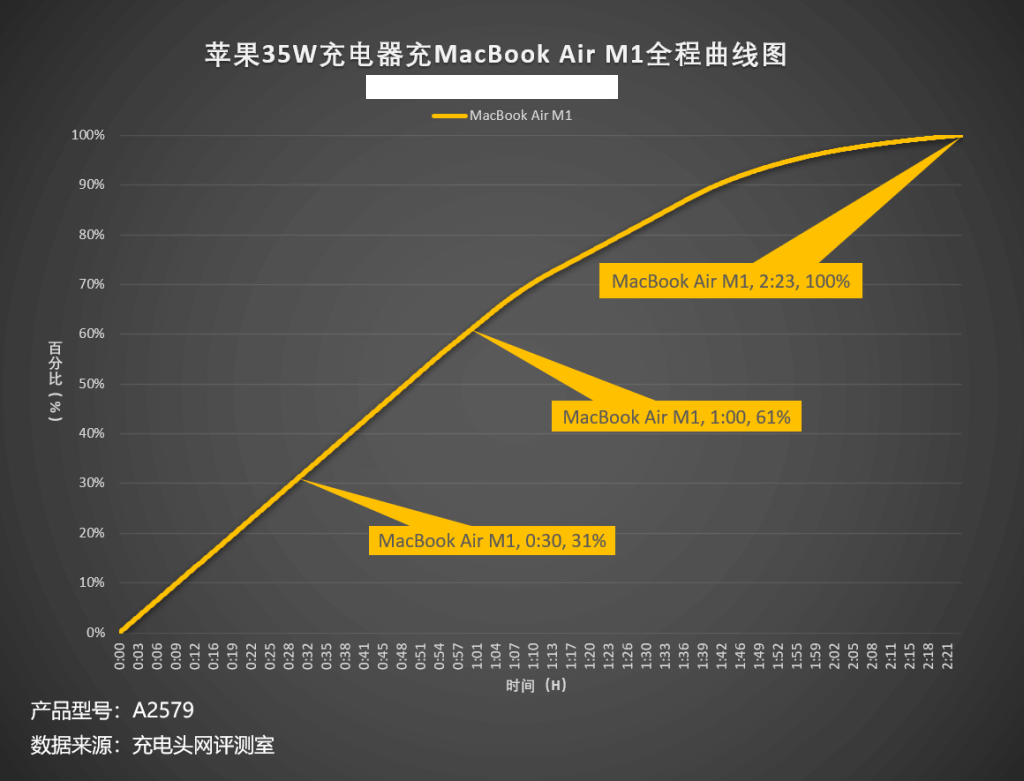 Plotting the entire charging process as a graph, you can see that the charger charges the MacBook Air M1 31% in half an hour, 61% in one hour, and takes about 2 hours and 23 minutes to fully charge.

Nowadays, it has become the norm for users to use a charger to charge their devices and then not unplug it from the socket. Many readers want to know if the charger is a waste of power if it is always plugged into the socket, and the standby power consumption test session is designed to answer this question. 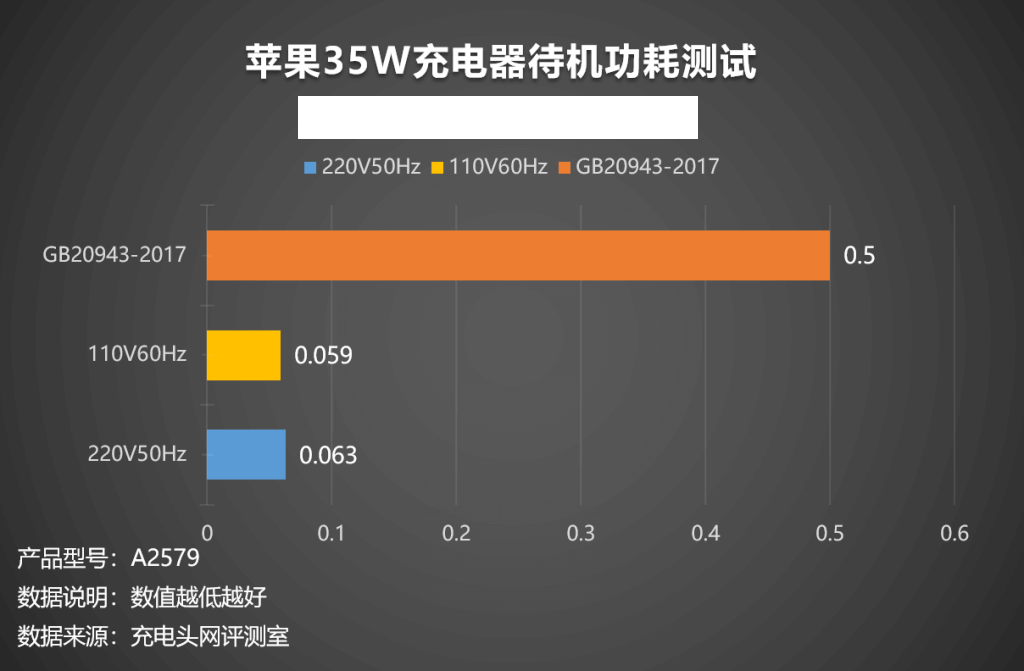 After the power meter test, the charger no-load power consumption at 220V 50Hz is 0.063W, which translates into a year of power loss of about 0.55KW-h, if the market price of electricity is 0.6 yuan/KW-h, the charger’s annual electricity bill is about 0.33 yuan.

Standby power consumption test is the charger plugged into the socket without, how much power will be consumed in a year, for the value of the words is naturally the lower the better. First of all, after the above test, Apple’s 35W charger standby power consumption is completely less than the GB20943-2017 standard should not be higher than the 0.5W value.

A charger is essentially a conversion device, and there are losses in the process, which are emitted in the form of heat. We usually look at the parameters above the charger output 100W or 65W is the maximum output power the charger can provide for the device, but the charger often draws more power from the socket, the following is the charger in the case of 220V 50Hz and 110V 60Hz AC input were tested for conversion efficiency, the test results are as follows. 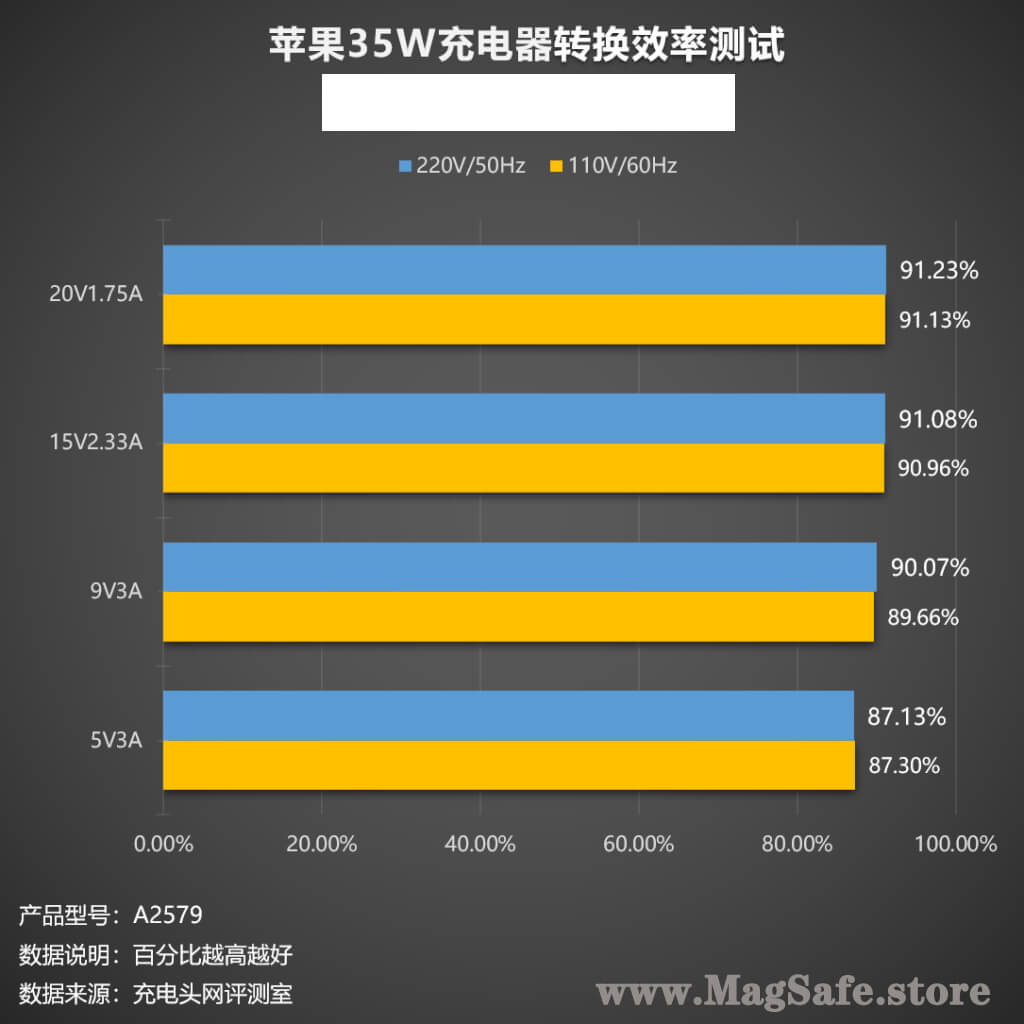 The conversion efficiency can reflect the quality of the charger, and naturally the higher the percentage from the data, the better. From the above test data can be seen in the multiple power output efficiency reached more than 90%, this efficiency in the camp of some high-power PD chargers are ranked in front. Associated with the charger’s high-power fast charging is geared to charging laptops, the most intuitive feeling for users is the high efficiency of charging laptops, the heat is naturally low. 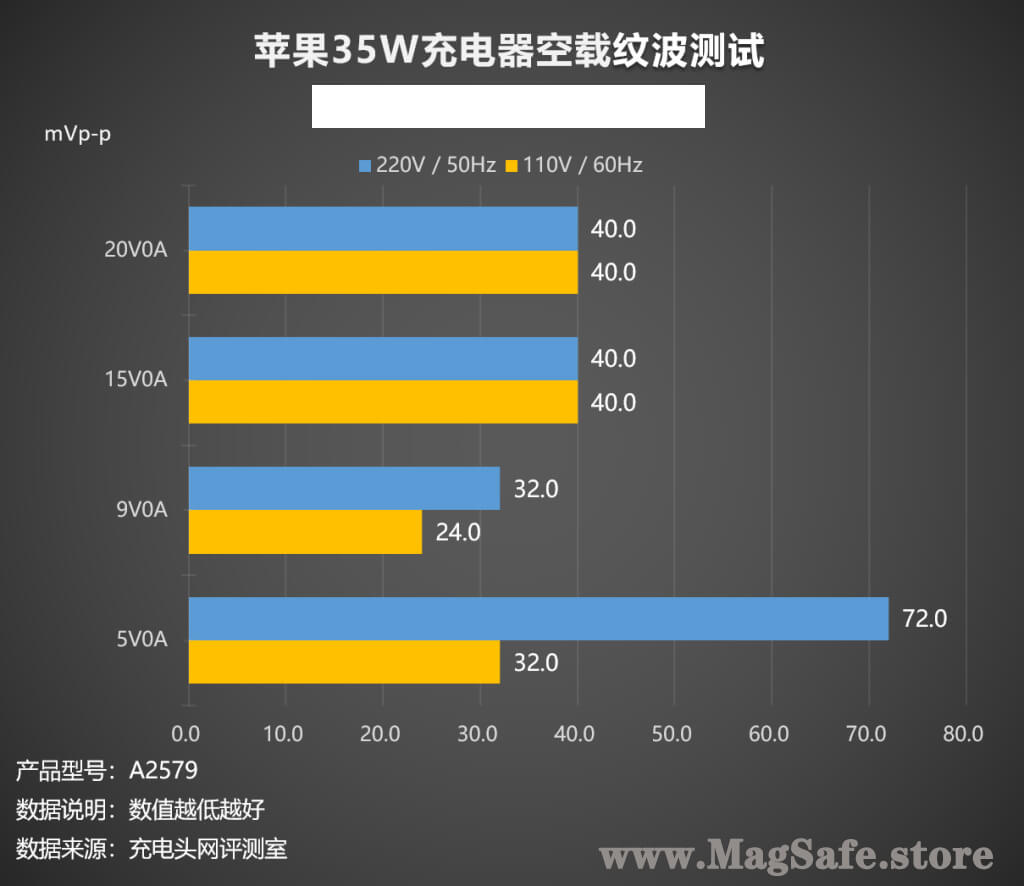 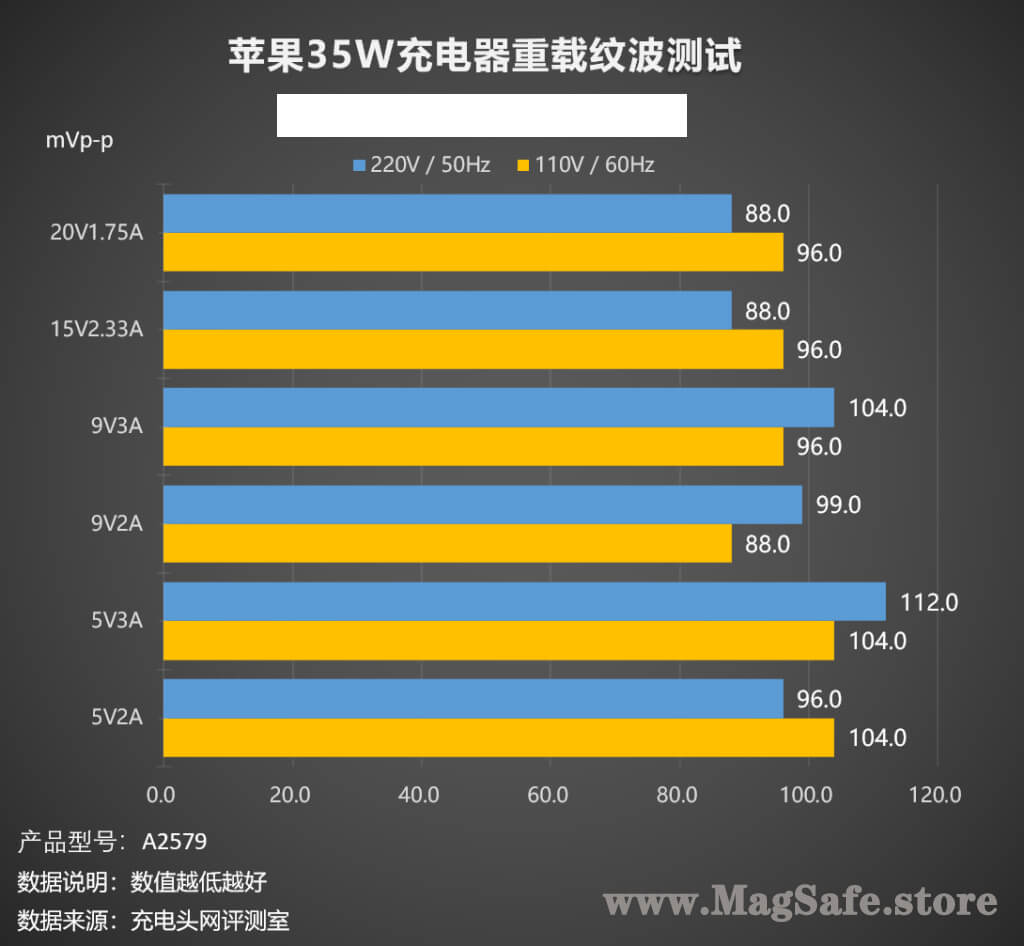 As mentioned earlier, the charger will involve the conversion of efficiency, in which the majority of power loss to heat, so the charger’s long working heat is also an important part of the test. Let the charger to 20V1.75A 35W power output for one hour, collect the charger surface temperature, the whole experiment will be placed in the 25 ° C thermostat.

First of all, let’s look at the temperature performance of the charger in the mains environment of 220V 50Hz. 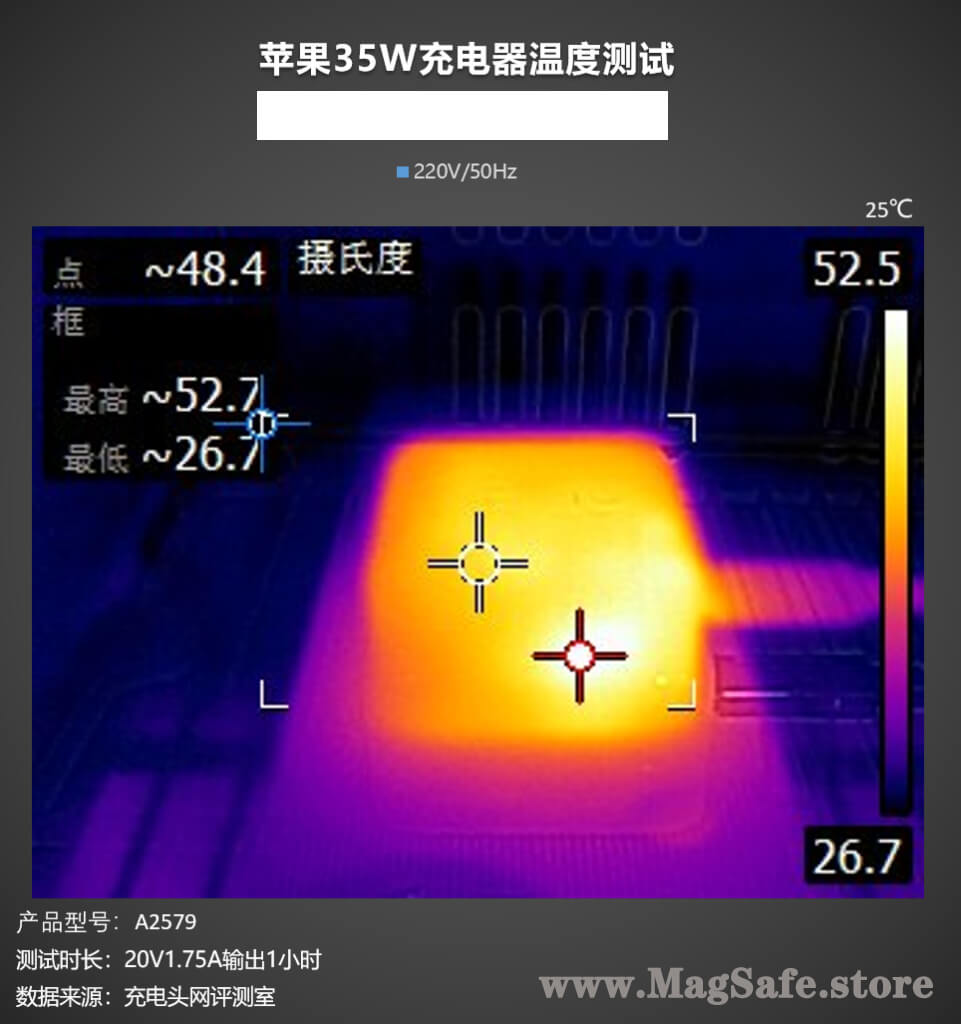 The maximum temperature of the two side surfaces of the charger was 52.7°C after 1 hour using a thermal imager. 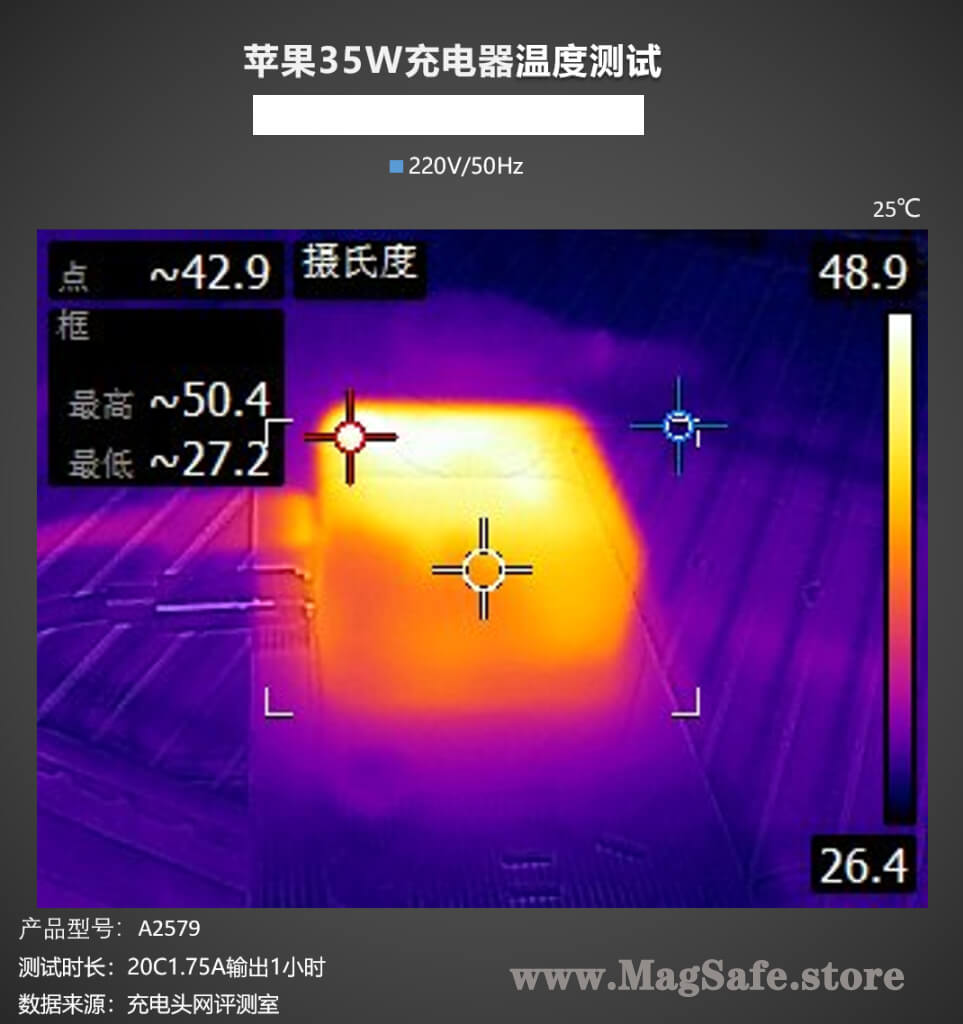 The maximum temperature of the other two side surfaces is 50.4℃.

Then look at the temperature performance of the charger in a 110V 60Hz mains environment. 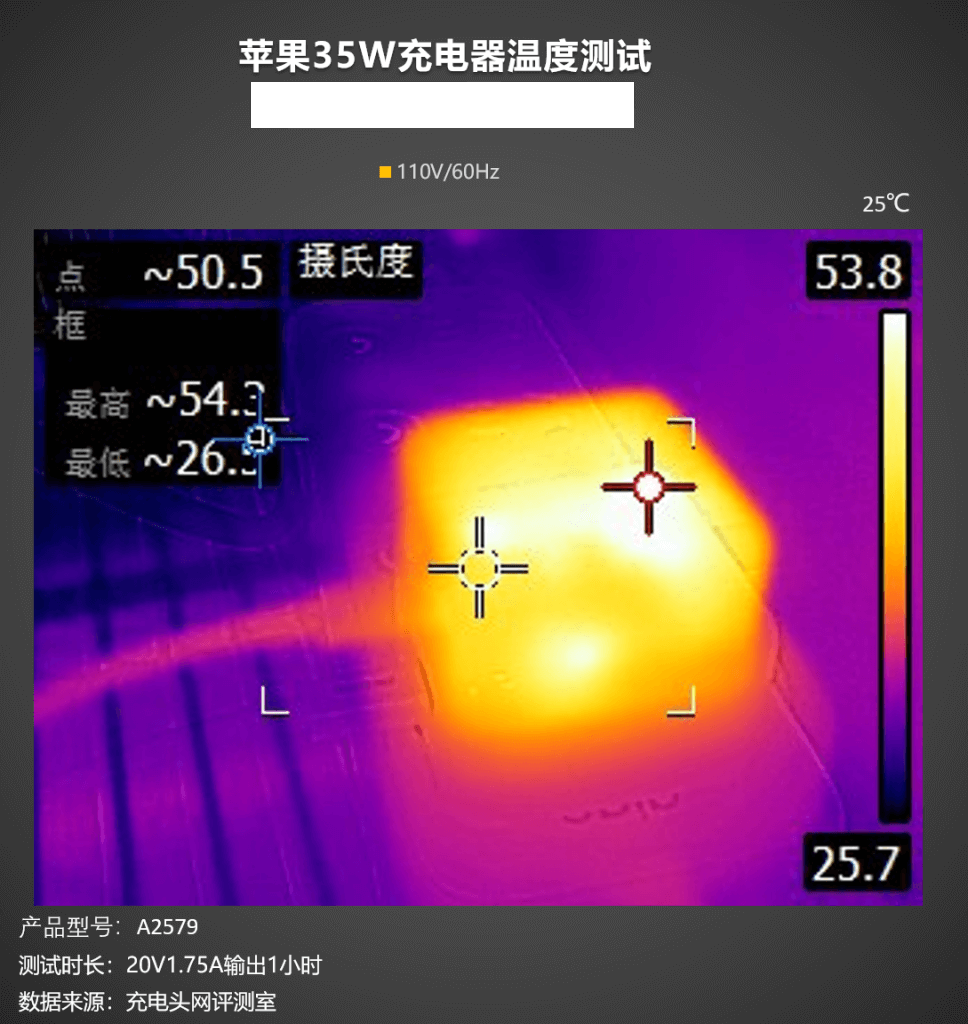 The maximum temperature of the surfaces on both sides of the charger was 54.3°C after 1 hour using a thermal imager. 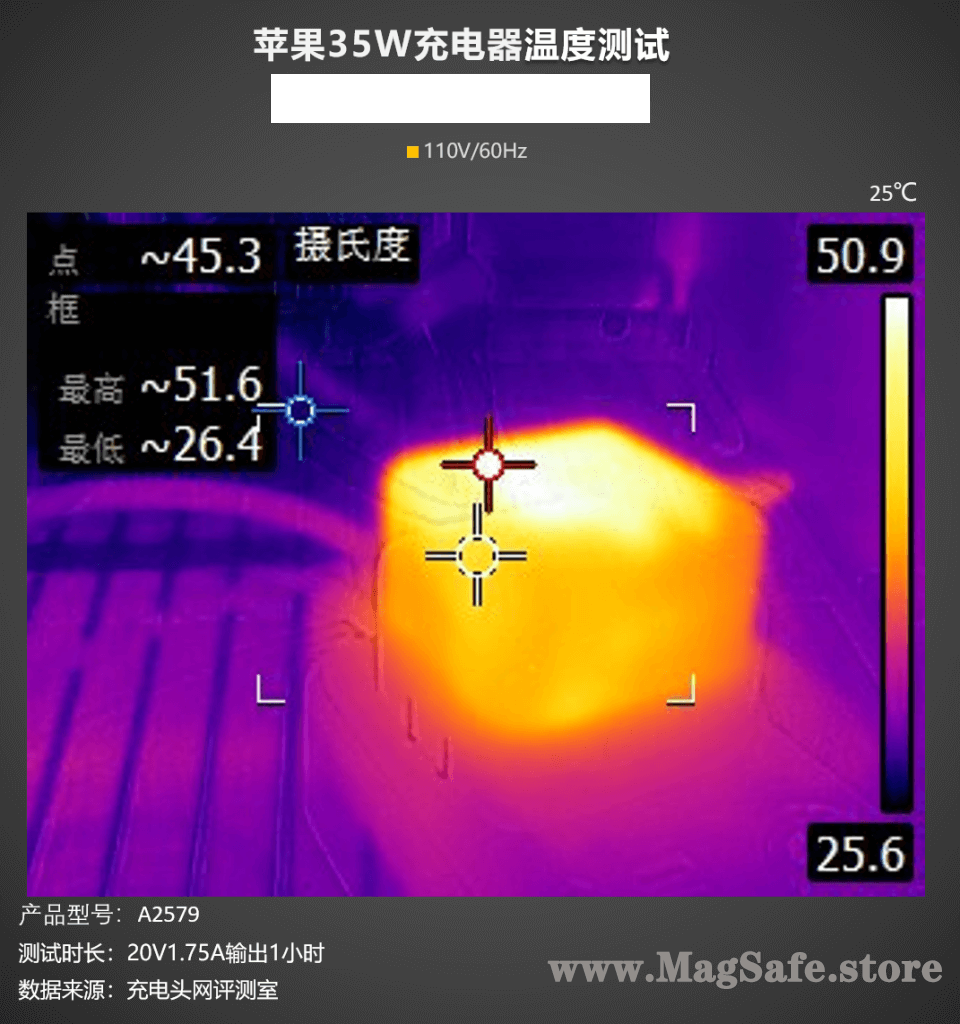 The maximum temperature on the other two sides of the surface was 51.6°C.

For 4 temperature data, the overall view are around 50 ℃, in a low level. 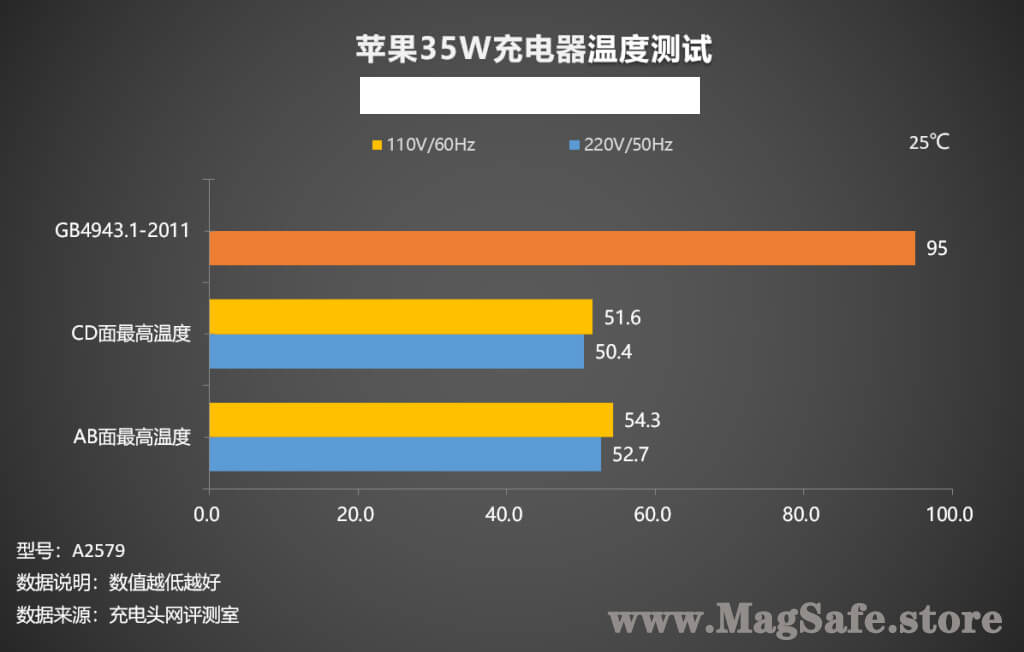 Will the charger degrade due to overheating after long hours of use? We have also tested the Apple 35W charger. 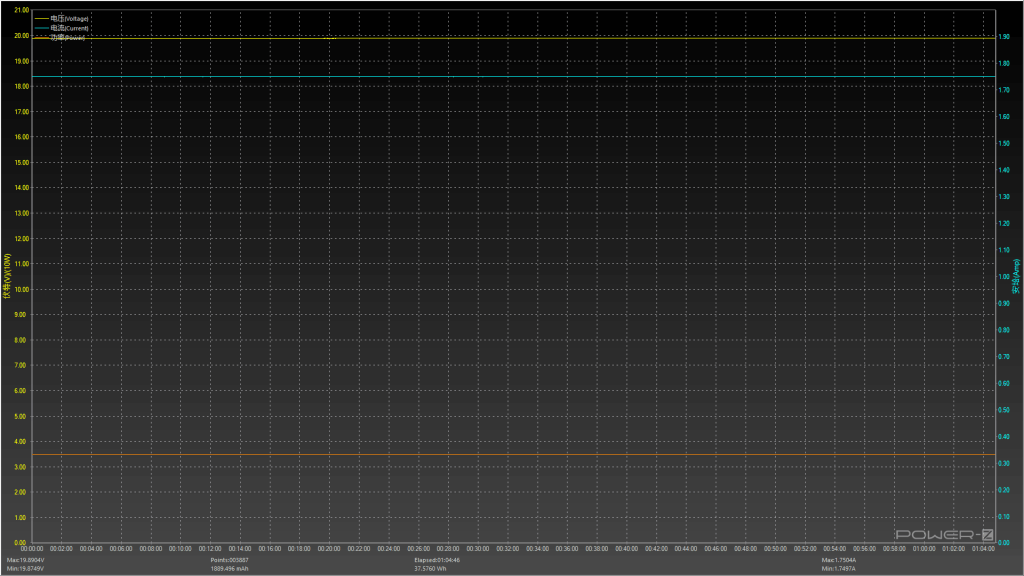 The charger gear to 20V1.75A, with 35W power continuous output for one hour, the test process voltage, current is a horizontal straight line, no obvious fluctuations, long time full load use is also quite stable.

Apple’s new 35W charger (A2579) follows the usual smooth and glossy white polycarbonate shell design, with a rounded transition at the edge of the connecting surface and a warm feel; and as one of the two chargers equipped with dual USB-C ports for the first time, it is also more compact in size than the original 30W charger, and of course as a small charger, the overall design language is different.

In terms of performance, this 35W charger from Apple is equipped with dual USB-C output ports, of which USB-C supports 35W output power and 20V output voltage when used independently. The MacBook Air M1 took only 2 hours and 23 minutes to run a full charge test. Although the charging experience is not much different from that of its predecessors, the reason is that the upper limit of the device prevents the “predecessor” charger from playing.

Quality, according to the national unified charger output quality standards, the lower the ripple, the higher the output quality of the charger, from the actual test results can be seen in the 220V 50HZ, 110V 60Hz two types of utility no-load state, slightly higher in the 5V gear, the rest of the ripple value is not more than 40mVp-p, heavy load state, the ripple value are in about 100mVp-p, quality In terms of quality, it is as stable as ever; while the conversion efficiency is between 87.13% and 91.23%, which is at the mainstream level; in terms of temperature, the highest temperature of 35W fully loaded for one hour is around 52℃, which is still very good in terms of temperature control, and it is also quite stable for a long time under full load.

Overall, Apple’s new 35W charger (A2579) from the appearance, configuration and performance with the “predecessors” are family heritage atmosphere, but has a dual-port simultaneous fast charging output, intelligent adjustment of power when continuous charging, but the cost performance, fruit fans ecstatic.

About the Author: MagSafe